After a breakfast of fried rice and vegetables, Mr. Shan announced “OK, we go.” So the other volunteers and I grabbed our water, phones, wallet, etc., and started walking toward the mountain along with the teenage Vietnamese students, leaving the busy street behind us. Sweating already, we stopped to watch and admire the buffalo with wooden bells around their necks and ropes attached to their septums. Beautiful, peaceful creatures. Nature encroaching on the narrow dirt road, we carried on until we arrived at a wooden house on stilts.
Took off our shoes and sandals and walked up some steps, entered the open room with a fire near the center. Fans blowing, the grandmother slicing pig fat, the grandfather peeling dried corn off the cob, the woman preparing green tea while her husband tended the fire: all of this gave a sense of controled action, of non-verbal communication. It was dark and cool in this elevated room despite the blaring sun and intense humidity outside (it’s hard to make a division between outside and inside, especially in the case of this house which is made of all natural materials and is porous, letting out the smoke, letting in fresh air and cats and bugs). A small television was in the corner, behind a mound of dried and ground corn, playing a “corny” Chinese film dubbed to Vietnamese. The beautiful woman with the ornate red cap which is traditional for the Red Yao tribe offered us shots of rice wine fermented with bananas which are grow in the mountains and retain the black seeds that are natural in bananas but which have been diminished by mutation, now appearing as the little brown spots at the interior of most bananas. Yes, please, and thank you so much. The grandma with arms like tree trunks sat near us and opened two small metal tins connected together by a chain and smeared calcium powder from one of the tins onto a leaf, added some wood chips, wrapped up the combination like a burrito, and commenced to chew. “They don’t have problems with cavities” said Shan as gramma spat a wad of dark orange spit into a bucket. “But it makes teeth black” added one of the students. Kyle, a volunteer from Vancouver, a psychoactive brother and Tao Te Ching-reader, bravely asked for one of the native gum concoctions and I followed suit, spitting saliva eerily colored blood-red.
We were invited to stay for lunch, and while the preparations were being made we explored the surrounding area. One of the Vietnamese students pointed at the murky pond next to the house and said “Eco-toilet” and laughed. We followed a trail leading away from the house into the oxygen-thick jungle to pick leaves from a bush that would be used in lunch somehow (another one of those points that gets lost before you even try to translate). And there we were, a mix of about 15 people sitting around a plethora of food. Pig liver, intestine, and fat. Rice, some delicious fried vines. A leafy soup. A bowl of mashed chili pepper and garlic and fish sauce. And the banana rice wine (not the slowly sipping and elegantly sniffing type of wine, but the wine that can be mistaken for whiskey and which has to be thrown down like the magical poison that it is). Like tea cups, the shot glasses were filled immediately once emptied. “When we drink alcohol we speak from the heart” explained Shan, “and with tea we speak from the mind.” Rukiya, a lovely volunteer from India, had to be coaxed into the first drink but by the end of the meal she was the one coaxing others into drinking, saying “You will cheers with me, Mika? You have no choice.” The grandma was really putting the drinks back, with obvious delight. She cheers’d me and said “We are poor people but we thank you for sharing food and our home with us. You make us more confident.” Such a sweet, strong woman.
I walked out and lit a cigarette and compassionately watched one of the students vomiting into the eco-toilet pond. I hope the fish enjoy rice wine and pig liver. By the time I returned, Rukiya was wearing traditional Red Yao clothes and being photographed. Grandpa gently sleeping in the corner, the final round of tea was poured and passed around. Wonderful to imagine the ancient trees from which the tea leaves came from up on the mountains. Everyone was smiling. Smiles transcend language I believe. We cautiously descended the steps from the house and continued on, trekking through rice paddies and a stretch of a busy street, finding our sweaty selves finally back at the unique tea house to do whatever it is we do. 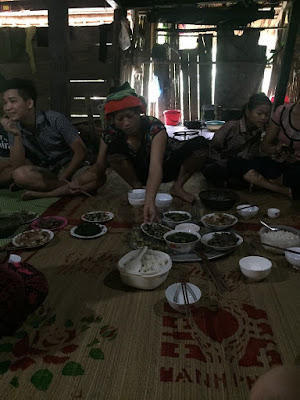 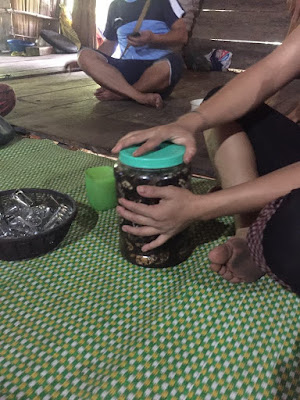 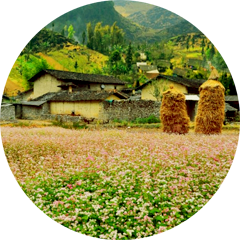